It was bound to happen

We interrupt our regularly scheduled post to bring you an update.

Call it odds, misaligned planets, bad luck or as I refer to it as, s#@t happens, it happened to us on the way to our show Sunday morning. You can not expect to spend every single weekend on the road and not be affected somehow. Ours was Sunday AM. 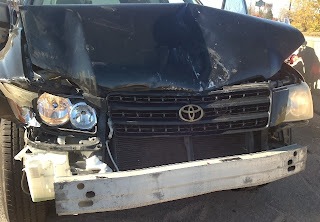 Rule #1  I have screamed it from the mountain tops and my friends think I am a bit crazy about this, but Toyota's save lives. It's the frame and impact beams they use. There was nothing left of the Pontiac that was in front of us. It crumpled and imploded and so did all the other cars involved. We only had front end damage and even the police thought we didn't have much compared to all the others.

Rule #2  Always have an accident during a procession of 350+ tow trucks doing their annual Towing for Tots benefit on the Interstate.

It was the most surreal happening, troopers pulled over, tow trucks pulled in front of and in back of the scene and protected the lane the crash was in, everyone jumped out of the vehicles and promptly went to work, sweeping the road clear of debris, checking on everyone's welfare and organizing things so that when the officials who were going to actually handle the accident scene arrived, everything was in place. Just amazing to watch it all transpire. The entire time you could hear them say, "just doing my job and as long as everyone is safe and okay, we're good." And nobody got paid a dime, it wasn't their call but they worked like it was.

I am very grateful to all of them for their professionalism, their care and their compassion. It made the sting of what happened a bit easier. Despite all of the bruises and scrapes, everyone walked away just fine.

Two hours late to our show, it was a very long day indeed.

And we are back on the road for next weekend at the find market event. You would think we would have learned our lesson! NOT !